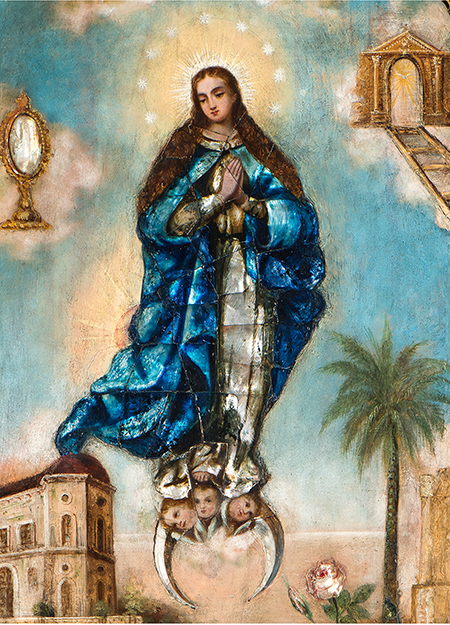 Sacred Art in the Age of Contact  focuses on the relationship between art and religion in both Chumash and Spanish traditions in the early Mission period, highlighting themes of devotion, sacred space, language and materiality. The exhibition investigates the mutually transformative interaction among these traditions, and will draw implications for the ways in which one can understand the cultural dynamics of Santa Barbara County today. Twentieth-century and contemporary Chumash visual production will be on view alongside sacred objects, demonstrating the continuity of the culture’s rich artistic practices. Sacred Art will provide an unprecedented point of entry into the artistic and cultural production of Chumash artists working within and alongside the Mission system, a story that has not yet been told on this scale in Santa Barbara County.

For all Santa Barbara Historical Museum events related to this exhibition, please visit their website at https://www.sbhistorical.org/.  Thank you.

Support for Sacred Art in the Age of Contact was provided by Mrs. Lois Erburu, and a grant from California Humanities.

Pacific Standard Time: LA/LA  brings a unique opportunity to Santa Barbara, encouraging cross-cultural dialogue and critical investigation of Latin American art in a local context.  Sacred Art in the Age of Contact and The Schoolhouse and the Bus are official participants of the Getty initiative.  This initiative is a collaboration of numerous arts institutions in California, and explores the historical relationship between Latin America and the greater Los Angeles area through a series of thematically linked exhibitions.

The Schoolhouse and the Bus: Mobility, Pedagogy, and Engagement.  Two Projects by Paglo Helguera and Suzanne Lacy / Pilar Riaño-Alcalá

Accompanying the exhibitions, each organization offers a season of educational programming, including lectures, workshops, and a Latin American Film series. The Santa Barbara collaboration culminates on the weekend of October 20 – 22, 2017, with each institution hosting panel discussions, symposia, performances, and lectures.

Pacific Standard Time is an initiative of the Getty with arts institutions across Southern California. The presenting sponsor is Bank of America.